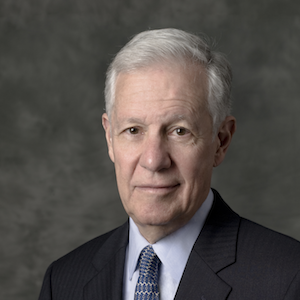 Mr. Sugarman is a nationally recognized trial lawyer who has specialized in intellectual property and First Amendment matters with Weil, Gotshal and Manges, LLP . He is a long-term fellow of the American College of Trial Lawyers.

Before commencing his term as Chairman of the Conference on June 1, 2013, he served from 2009 to 2012 as National Chair of the Anti-Defamation League. He is a past president of Hillel of New York, served on the executive committee of the Lawyers Division of UJA/Federation of New York and is a member of and Counsel to the Collections and Exhibitions Committee of The Museum of Jewish Heritage-A Living Memorial to the Holocaust.

He is a graduate of Yale College and the Yale Law School and lives in New York City with his wife, Surie Rudoff Sugarman. He has four children and six grandchildren.