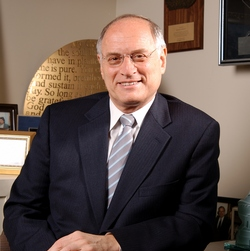 In June 1986, Malcolm Hoenlein was elected Executive Vice Chairman of the Conference of Presidents of Major American Jewish Organizations, the coordinating body on international and national concerns for 52 national Jewish organizations. He was succeeded by William Daroff on February 1, 2020, becoming Vice Chair. Previously, he served as the founding Executive Director of the Jewish Community Relations Council of Greater New York, the central coordinating agency for Jewish organizations in the metropolitan New York area. Prior to that, he was the founding Executive Director of the Greater New York Conference on Soviet Jewry.

Malcolm Hoenlein received his B.A. in Political Science from Temple University and completed his Masters degree and doctoral course work from the University of Pennsylvania’s Department of International Relations. A National Defense Fellow in the University’s Near East Center, Mr. Hoenlein taught International Relations in the Political Science Department and served as a Middle East specialist at the Foreign Policy Research Institute. In addition, he served on the editorial staff of ORBIS, the Journal of International Affairs.

Mr. Hoenlein has traveled throughout the world meeting with world leaders and Jewish communities. He has written and lectured across the US and abroad on international relations, Israel and Middle East affairs, Soviet and World Jewry, terrorism, the American Jewish community, and intergroup relations.

Mr. Hoenlein serves as an advisor to many public officials and is frequently consulted on public policy issues. He appears regularly in the media.

Mr. Hoenlein has been the recipient of many awards and tributes.  Among recent honors, he was conferred a Doctorate of Humane Letters (Honoris Causa) by Yeshiva University and a Doctorate of Laws (Honoris Causa) from Touro College and was honored by, among others, State of Israel Bonds for his “valiant and extraordinary service to Israel and the Jewish people,” the Private Sector Initiative Award from President Ronald Reagan, American ORT honored him with a special “Man of the Millennium” Tribute, the first Quittman Award for Jewish Professional Excellence, the Defender of Jerusalem Award, Millender Fellow at Brandeis University, Fellow of the Jerusalem College of Technology, the Jack D. Weiler Award for Jewish Communal Service, and the Union of Orthodox Jewish Congregations National Service Award. Mr. Hoenlein played a key role in organizing the massive National Solidarity Rally for Israel in Washington, DC.

The Mayor of Jerusalem announced in 2007 that the City Council had designated Mr. Hoenlein recipient of the city’s highest tribute, the “Neeman Yerushalayim” (Trustee of Jerusalem) award. Mr. Hoenlein was appointed by three Presidents as a U.S. delegate to the Organization for Security and Conference in Europe, most recently in June 2007. He also served on the New York State Ethical Standards Board.

Mr. Hoenlein is associated with and serves on the boards of many communal, educational and civic organizations including the Council on Foreign Relations. He is Chairman of America’s Voices in Israel and Co-Chair of the Secure Community Network. He serves on the Boards of Directors or Advisory Boards of several companies.